No, not our president or his pals Roger Ailes and Bill O’Reilly. I’m talking about a 112-million-year-old dinosaur found by chance in Canada, at the Suncor Millennium Mine near Fort McMurray in 2011. Not only is this a new species of nodosaur, or armored dinosaur, but it’s the best-preserved one ever found. Meaning that paleontologists can examine its mummified skin and will eventually decode the contents of its fossilized last supper. If you happen to be in the vicinity of the Royal Terrell Museum of Paleontology in Alberta, stop on by to see the exhibit. Life is too short to endure the natterings of imbeciles, which is why I didn’t tune in to see the televised debate between the voice of reason aka Bill Nye the Science Guy and Ken Ham, the creationist convinced the world is merely 6,000 years old, and that T. Rex played Ring-around-the-Rosie with the cavemen who wrote the Bible. 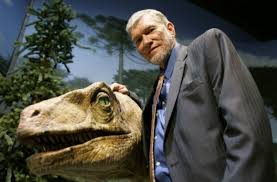 Look, Ken is entitled to his beliefs. But he and his fellow Creationists have zero right to try to impose their religion in schools. That’s the issue.

Plus, I might have had a little respect for the guy had consummation been the between-the-sheets kinda thing, but no. His idea of consummation is heaven.

So I have a Luchers’ “7 C’s” list of my own. This is what I think of Ken Ham and his followers, who want to upend the Constitution and shove their religious philosophy down the throats of school kids everywhere, no matter what their family’s personal faith happens to be: Corrupt, Condescending, Contemptible, Catastrophic, Confused, Cuckoo, and Consummation, which is what anyone would want to do just to clear their heads from this nonsense.

This handy cheat sheet will give you all the highlights: Bill Nye, Ken Ham Creation and Evolution Debate | TIME.com http://swampland.time.com/2014/02/05/bill-nye-ken-ham-debate/#ixzz2sTeIrkV6 Maybe there’s hope for Texas after all. Their State Board of Education finally voted to approve a Houghton Mifflin environmental science textbook after the blowhards of the oil/gas business tried to undermine the book’s credibility. Based, of course, on their denial of climate change.

That disagreement was not as severe as the one Creationists have been trying to pull. They don’t want evolution to be taught in public schools, and not in their state. Never mind that the Constitution that they claim to believe in is about as blunt about the separation of church/state as it’s possible to be. I honestly don’t know why it’s so difficult for these Creationists to admit that the Bible is what it is. It is the source of their faith. It is certainly not a valid expression of scientific truths. And it doesn’t belong in the classroom.

“This textbook business is, to my way of thinking, a very serious matter, because of the economic impact,” Bill Nye the Science Guy told HuffingtonPost. “Everyone should take a moment and think what it will mean to raise a generation of students who might believe that it is reasonable to think for a moment that the Earth might be 10,000 years old.

“It’s an outrageous notion,” he went on. “It’s not a benign idea. It’s inane or silly. These students will not accept the process of science, which will stifle or suppress innovation.”

Unless the innovation they’re seeking is what color to paint the dinosaur they’re plonking next to a human in one of their Creationist Museum dioramas.

It sure looks like it’s in bloom, but this startling image taken by the ever-reliable Mars Rover might be nothing more than an accumulation of glistening mineral deposits knows as a phenocryst. Or maybe it was a leftover piece of something thrown up from an eons-old impact.

Whatever it is, this “flower” is keeping eyes glued to Mars, and I think that’s a good thing. We need a little mystery in our lives, and we need to keep believing in the hard facts that only science can provide.

For more discussion, go to http://freethoughtblogs.com/zingularity/2013/01/04/curiosity-and-the-martian-flower.

The only time I will likely wish I had 3-D capability at home is when I was watching the astonishing documentary, Cave of Forgotten Dreams, Werner Herzog’s meditation on art, history, mortality, and what he called “One of the greatest discoveries in the history of human culture.”

Three explorers found a cave along the banks of the Ardeche River in France in 1994, and thanks to an eons-old landslide which sealed the entrance, the cave paintings within have been perfectly preserved since they were created over 32,000 years ago. The luminous vivacity of the long-extinct animals painted on the Chauvet-Pont-d’Arc cave’s walls is staggering. On one wall, a series of hand prints is more contemporary than a Damian Hirst dot painting, with the crooked pinkie of the artist making him (or her) palpably real. Equally dazzling are the endless limestone formations that grew only after the cave was sealed, glittering calcite sculptures as sinuous as a snake and as pearlescent as a highly polished necklace of the most sumptuous jade. As I was watching I couldn’t help wonder what explanation Creationists could come up with to explain how carbon dating placed the artwork at 32,000 years of age with such accuracy, or how the 9,000-foot-thick glacier that covered the landscape at the time would have finally melted and receded, or why the wooly mammoth and the cave bear (whose tracks and preserved skeletons are visible in the cave) and the hairy rhinoceroses disappeared from our planet.

Herzog’s stellar eccentricities of content and uniquely flat delivery of the narration, coupled with an Ernst Reijseger score that is at times as luminous as the art and then intrusively precious the next, lulled me into a state of near-perfect bliss. The animals depicted come alive as Herzog’s camera slides over them in awe, the lighting as flickering (due to strict restrictions on equipment and limited hours in the cave to protect the art from carbon dioxide) as the Paleolithic torches must have been when the images were first drawn, perfectly shaped on the smooth curving walls of the cave. The 3-D would have made them pop into consciousness even more, I could tell. But no matter—this film is available to watch instantly on Netflix, and if you have 90 minutes to spare it is the perfect way to bring a celebration of artistic creation into your memory as the year draws to an end. If this piques your interest, read this http://popular-archaeology.com/issue/september-2011/article/revisiting-the-chauvet-cave and then search online for more.