If you were of age when Spielberg’s Jaws hit movie theaters in 1975, you probably avoided the beach that entire summer.  Which is why I got such a kick out seeing the clever way that the Alamo Drafthouse in Austin, Texas is showing this film at its Jaws on the Water screenings. They’re floaters, not sinkers.

No, not when Bruce the mechanical shark met his demise in Jaws, or Amal married George, but when Odell Beckham Jr. made this gravity-defying nab during the Giants/Cowboys game yesterday.

I’m not much of a football fan, but you’ve gotta admit this is just a breathtaking moment where a human body exceeds all expectations. Way to go, Odell!

And the memes aren’t bad, either.

There are some movie scenes and movie characters so indelible that they etch themselves into your consciousness, whether you want them to or not. This is great movie posterity—but maybe not so great for the actors who then get typecast and can’t push past the image they unwittingly created.

So it went for actor Richard Kiel, who just died at the age of 74. He would have been memorable if only for his height (he was 7’2”), but what catapulted him into world-wide fame was his villainy in The Spy Who Loved Me in 1977 and Moonraker in 1979.

His horrifying chompers gavehim the nickname “Jaws.” And his very physical and very over-the-top did bring out the best in Roger Moore. 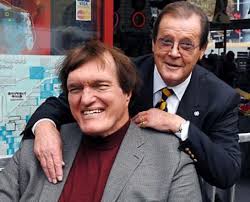 Richard had many other roles over the years, including voicing Vlad in Disney’s Tangled. He was actually a really nice guy.

But no one will ever forget those astonishing steel teeth.