She lived through 10 different presidents, and gave them all a piece of her formidable mind at the press conferences where she was a fixture. White House journalist Helen Thomas recently died at age 92. She paved the way for equally feisty female journalists to fight their way into the boys-club mentality of politics and political coverage.

It was really shameful, however, that her amazing legacy was, in my opinion, severely tarnished by comments she made in 2010, urging Israel to “get the hell out” of Palestine. Plenty of people feel that way, but what galled was her then saying that “the Jewish people should go home to Poland, Germany … and America and everywhere else.”

Yeah, where they were really wanted and live such long and happy lives.

In her apology for this anti-Semitic rant, Thomas said that these views “do not reflect my heartfelt belief that peace will come to the Middle East only when all parties recognize the need for mutual respect and tolerance. May that day come soon.”

Too little, too late. I didn’t believe that half-hearted comment, and I don’t think many others did either. 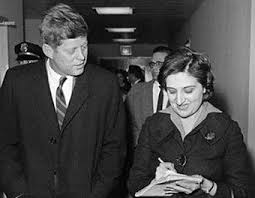 But she sure was one hell of a journalist.