There would be no Rolling Stones as we know them were it not for the brilliant mind of the Bavarian financial whiz, Prince Rupert zu Loewenstein, who died a few days ago at 80. Even though he was no fan of rock music (he actually admitted he preferred the Beatles!) or drugs or stupid excessive behavior, he stuck around as the band’s money manager. He made them tax exiles and master merchandisers and gazillionaires. He kept them out of jail. He babysat them through countless dramas.

No wonder he described himself as a “combination of bank manager, psychiatrist, and nanny.” Mick got peeved when Rupert wrote his memoir, A Prince Among Stones, in 2013, but I’d wager that after recently losing his girlfriend L’Wren Scott to suicide, he’s feeling this loss very keenly too. Rupert was like a surrogate dad to him for decades.

He knew how to live the life, and he lived it well. This was a total shock—the incomparably talented L’Wren Scott, designer, muse, girlfriend of Mick Jagger, cool, soigné, a beloved friend to many—was found hanging yesterday, an alleged suicide. She was only 49. L’Wren was adopted by a Mormon couple and grew up in Utah as Luann Bambrough until her height (nearly 6’4”), long limbs, and beauty brought her to the attention of the fashion business. She was a successful model and even more successful stylist to the stars before she started her own company. Women loved her figure-flattering clothes, and she recently designed a line for Banana Republic. According to reports, her company was failing and millions of dollars in debt, which may be why she cancelled her last collection, citing production delays. But even a failed business—no surprise in such a fickle and difficult line of work—is no reason to hang yourself from a door with a scarf. She could have sold her apartment and paid off the debts and then some. Clearly, she was not in her right mind.

All that is known is that Mick and the Stones were on tour in Australia when this happened. They’ve been a couple since 2001 and a spokesman said Mick was completely shocked and devastated.

It just goes to show—you’d look at this amazingly talented couple who so clearly seemed to adore each other….you think of their creative success….you think of all the press and adulation…the beautiful homes and adoring friends and family…but nothing matters when the dark clouds swirl too thickly for you to think of your future with any happiness.

What a sad, tragic shame for such a seemingly fairy-tale life. 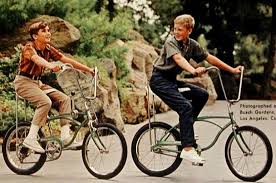 I finally got around to catching up on reading the papers I was too busy to get to last week, and when I saw the obituary for Al Fritz, who died at the age of 88, it brought back a wave of memories most Lurchers should share. That’s because Fritz invented the Sting-Ray bike. Kids didn’t know his name, but they sure knew what they wanted.

Before the Sting-Ray came along, we all peddled around the neighborhood on our normal-sized Schwinns. When Fritz, who worked for Schwinn, saw how kids were sticking their own long handlebars and banana seats on their bikes to snazzy them up, the light bulb went off. This bike made riding cool.

My Schwinn was like the Beatles. The Sting-Ray was the Rolling Stones. 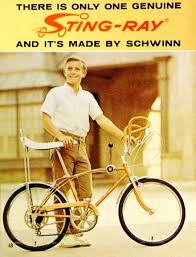 You never know what you’re going to find in an estate sale. In a box marked “Found,” some lucky duck got a box containing 23 candid snapshots of the Rolling Stones during the southern leg of their 1965 US tour.

Brian Jones doing a handstand by the pool. Four years later he was dead in another pool

These snaps are a hoot—Mick and the gang relaxing by the pool of inexpensive motels. No stylists, bodyguards, screaming fans, drug dealers, or attitude to be found.

I’ll bet this was the first and last time any of the Stones stayed in the Manger Motor Lodge in Savannah, Georgia.

Take a look at: http://www.dailymail.co.uk/news/article-2209114/The-Rolling-Stones-Unseen-pictures-taken-achieved-global-success.html#ixzz27c9Q84sV